UPDATE (Jun 7, 2013): I created an ascii.io video demo of autosquash for your viewing pleasure.

Pull requests are an extremly crucial part of our workflow at Mobile Defense. We pride ourselves on producing quality code and we do not subscribe to the git-blame “I didn’t write it” culture. We all take responsibility for all the code we produce, as a team. As such, being able to review our code efficiently and thoroughly before it gets into master is a goal we are constantly looking to improve upon.

A somewhat paradox in reviewing code arises when the need for reviewers to see the updates based on their feedback quickly and efficiently and for the developer to be able to ‘fixup’ their branch before merging to ensure the code enters master as cleanly as possible. That’s where git-rebase comes in.

Rebase is an extremely powerful tool in the git toolbelt. Combine commits, edit commits in-place, rewrite history, etc. It’s especially great for cleaning up your topic branches before submitting for code review. However, remembering which commits need to be squashed into which can be tricky especially when being the reviewee and the reviewer on multiple pull requests daily. Well, it turns out git already has a really clever, built-in way to organize and automate the branch cleanup process. It is perfectly suited for making changes based on pull request feedback. It’s called autosquash.

As you might have experienced or noted in the workflow above, how do you keep organized and remember which temporary commits should be squashed into which original commits? The problem I ran into time and time again was that as soon as I started an interactive rebase I would be unable to remember exactly which commits needed to be changed, squashed, or fixedup. So, I had been developing some commit message conventions for temporary commits.

For example, a commit which I knew was incomplete work or needed to be looked at again would have it’s message prefixed with an excalmation mark.

Further, commits which I knew I wanted to squash into previous commits would be prefixed with four hyphens and have a message which I would be able to make sense of when editing the rebase todo file.

This worked fairly well as long as I left myself good notes. But, surely there must be a better way!

The --autosquash flag on git-rebase is exactly what I was looking for. During an interactive rebase, it processes messages to stage squashes and fixups. These messages are setup with flags on git-commit at commit time, which is when you are most likely to know what you ultimately intend to do with commits. Further, it works via the commit message so it’s easy for humans to understand as well!

Say you have a feature branch with three commits: (viewing git logs with the incredibly awesome lg alias)

Now let’s say you get a review comment on the commit for the tests (‘Ensure …') which asks to add a test for a missed edge case.

So we will code up our edge case fix and as we commit, we’ll add the flag to specify what we ultimately will do with the commit.

Git-commit has two such flags: --fixup and --squash with each of these we will specify the commit into which we want to fixup or squash. In our example, we want to fixup into the first commit after master: 293070e.

We can do that with:

Which will produce a commmit with a message of:

A commit message formatted this way tells git-rebase (with --autosquash) to fix the patch in this commit up into the commit with the message “Ensure new hotness works”. The power of using the commit message instead of SHA1 to identify commits is that this will work even after a rebase without --autosquash (e.g. pulling in lastest master changes).

Here’s how it would look in github: 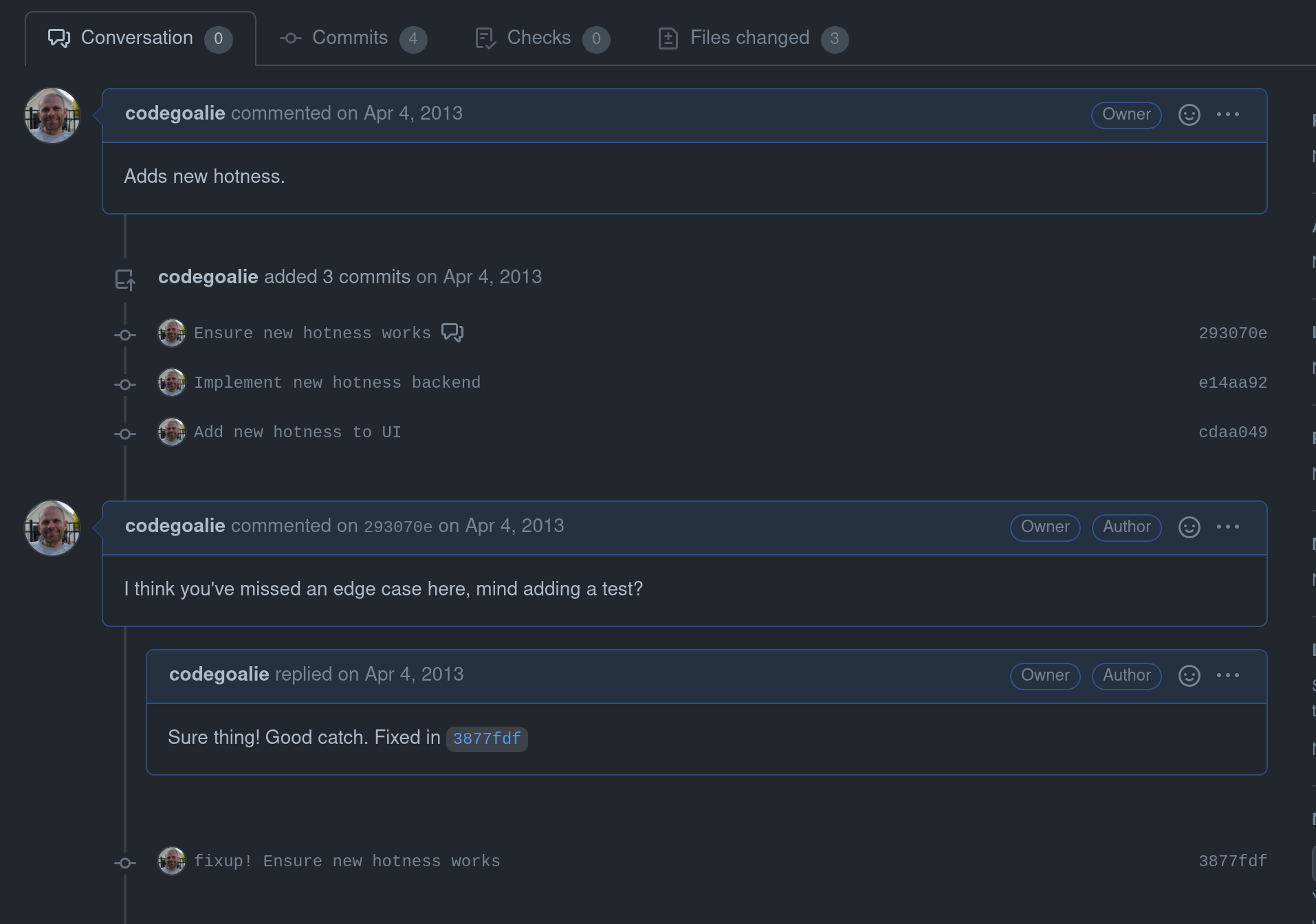 Obviously, don’t have conversations with yourself on github. This is purely educational ;)

Now the fun part! When the pull request is approved, you can rebase with autosquash (and interactive) and watch as git does the work for you:

Simply save it and git rebases the branch as if you had changed the file yourself. You can then merge and have a beer for all your efforts!

Adding the long --autosquash flag all the time can get tiresome. Luckily, you can add the rebase.autosquash config value to run autosquash automatically for every interactive rebase.

If no commits with the fixup! or squash! syntax are found, the rebase continues normally. To override the autosquash default value, simply pass the --no-autosquash flag to rebase.